For our short film noir indie, The Recursion Theorem, we rented a warehouse and transformed it into an early-century mansion parlor. Read this three-part series to find out how!

How it all began

While developing our story and working through pre-production, our plan was always to shoot The Recursion Theorem on location. The screenplay was written to be simple from a production perspective – involving only one actor in one room. So we were confident that we’d be able to find an existing location that would meet our needs, and be within our budget (which was presumably under $1,000). We couldn’t have been more wrong! After a few site scouting visits, it was becoming painfully obvious that there were major roadblocks to our approach of using real world locations for our set.

The Fairfield Estate had the character and style we were looking for, but the rooms were too small and the ceiling height too low for our production needs. It would serve as our main reference as we worked on designing our own set.

The first problem was finding a location that had the qualities we wanted at a price we could afford. For our story, it was important to me that the place we filmed in felt well worn and vast. The room itself needed to embody the weariness, isolation and exhaustion that we’d observe in our protagonist, Dan Everett. With time being such an important element in The Recursion Theorem, I wanted the audience to know that the reality we bring them into for this story is a unique place that has been around for a long long time.

To fit this quality, we began looking at early 20th century homes and mansions in and around the Washington DC area. With a little work, we found some great locations that fit the style and feeling we needed. Unfortunately, these places were a little too good – in heavy demand for an array of uses, from fundraisers, to weddings, to various social functions of one kind or another. These places rent out space regularly, and for a pretty penny — so making availability for a micro-budget film isn’t really in there interest. In order to find places we might actually be able to afford, we had to look further out.

The Long Branch mansion had plenty of room. But as a historic site, there were strict limitations on how we could use and modify the space. It was also kept up a little too well for our purposes, and those huge windows would be a problem for our story. Not to mention the fact it was expensive to rent, and two hours away.

Further out turned out to be a couple hours drive into the more rural areas of Virgina — leading us into our second problem. We were already asking a lot from our cast and crew as volunteers to keep costs down. The idea of asking everyone to bring themselves and their equipment on a two hour trip every day we needed to shoot wasn’t practical, nor would we be able to afford putting everyone up in a hotel. Not to mention the fact we’d waste valuable time on location having to set up and tear down each weekend we were able to work. Even if you ignore those hurdles, it was still hard to find the perfect place. One would have the right look and feel, but the ceilings were too low for our lights and other equipment. Another would have the right size, but was also a protected historical site with strict limitations on how we could use the space, hang things on walls, move furniture… oh, and still incredibly expensive to rent. Problem after problem emerged as we continued to pursue locations to shoot Recursion, leaving us stuck at a dead end. 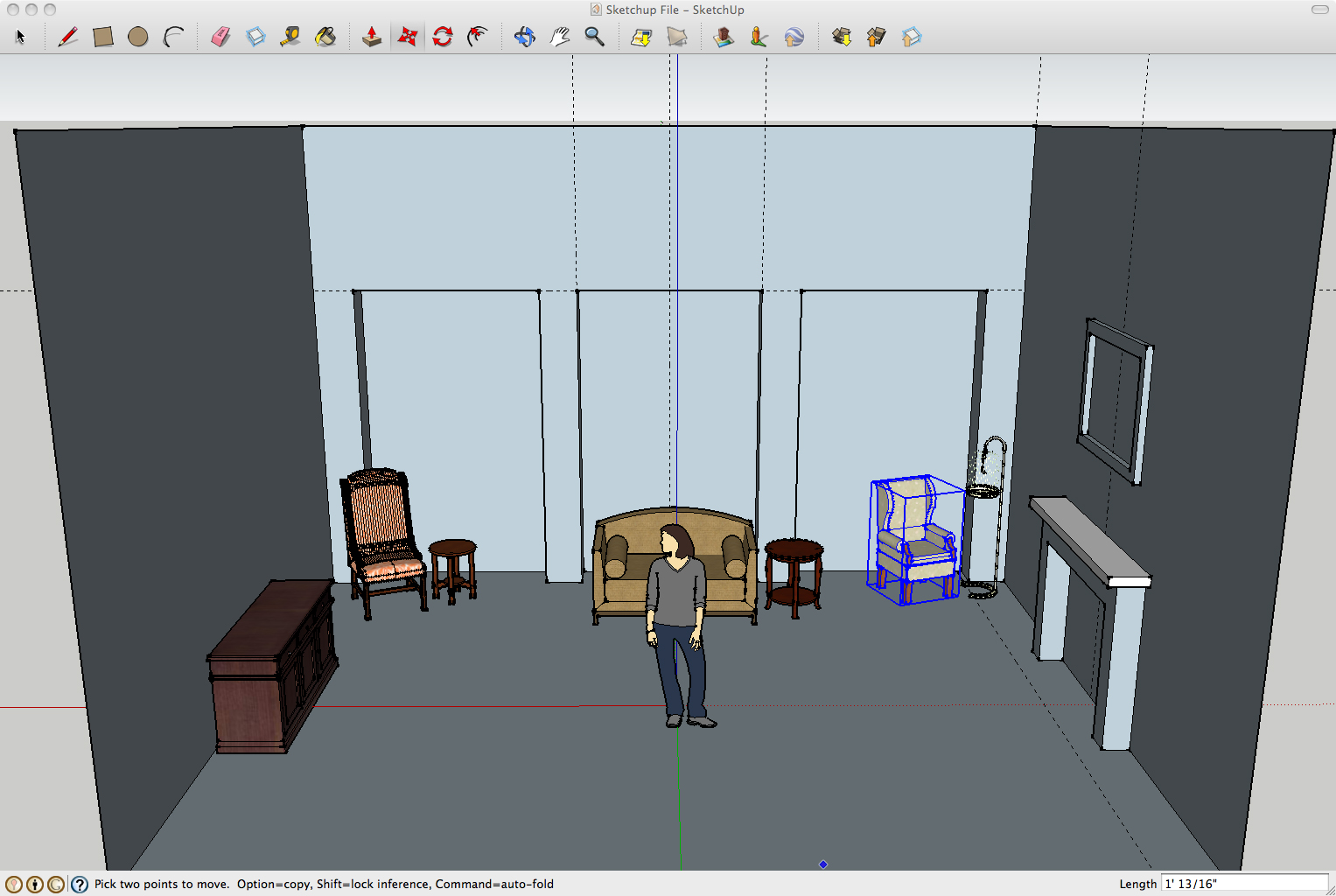 Quick pre-visualization was done on some of our potential locations to work out spacing and set pieces using Google Sketchup.

Having stalled for several weeks with our location problem, and desperate for a solution, the idea of constructing a set finally hit. I knew we only needed one back wall, two side walls and a floor to form the “room” required for our set. Due to the rules of the universe our story is set in, we’d never see the fourth wall or the ceiling. Studying reference photos from our scouting visits, I became confident that our needs were actually not that complicated. After a little research online, I floated an idea during one of our production meetups. “Guys, I’m pretty sure we can build this!” 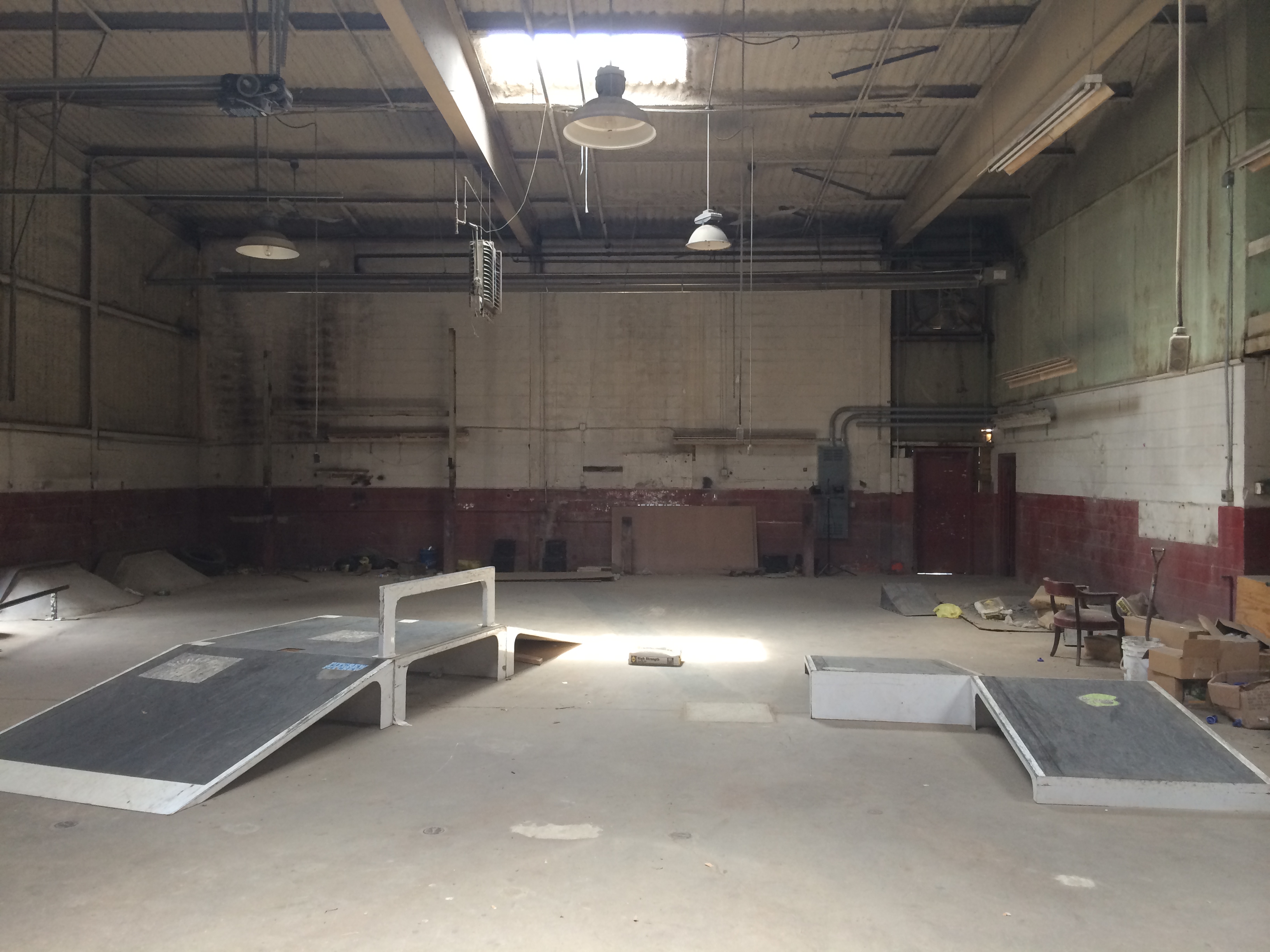 A warehouse would provide the space we needed, if we could just find the right one. This was one of the earliest we considered, but it was pretty remote and security was an issue.

It wasn’t an easy sell for the team, but after a few additional weeks of crunching numbers and running options, it became obvious that we would be able to rent a warehouse, build our own set and house it for a month all for about the same price as we’d pay to rent a remote mansion for a couple of days. The budget would be higher than we anticipated, but finding an existing place that met all of our needs would be even more expensive and a nightmare for production scheduling. Having our own warehouse meant 24/7 accessibility, a local location, and more space than we needed. It seemed crazy (none of us had any experience building a set) but, the advantages were far too great to ignore. The team eventually came on board, and we decided to move forward with Plan B – designing and constructing our very own set! The question looming over all our heads was, “How?” 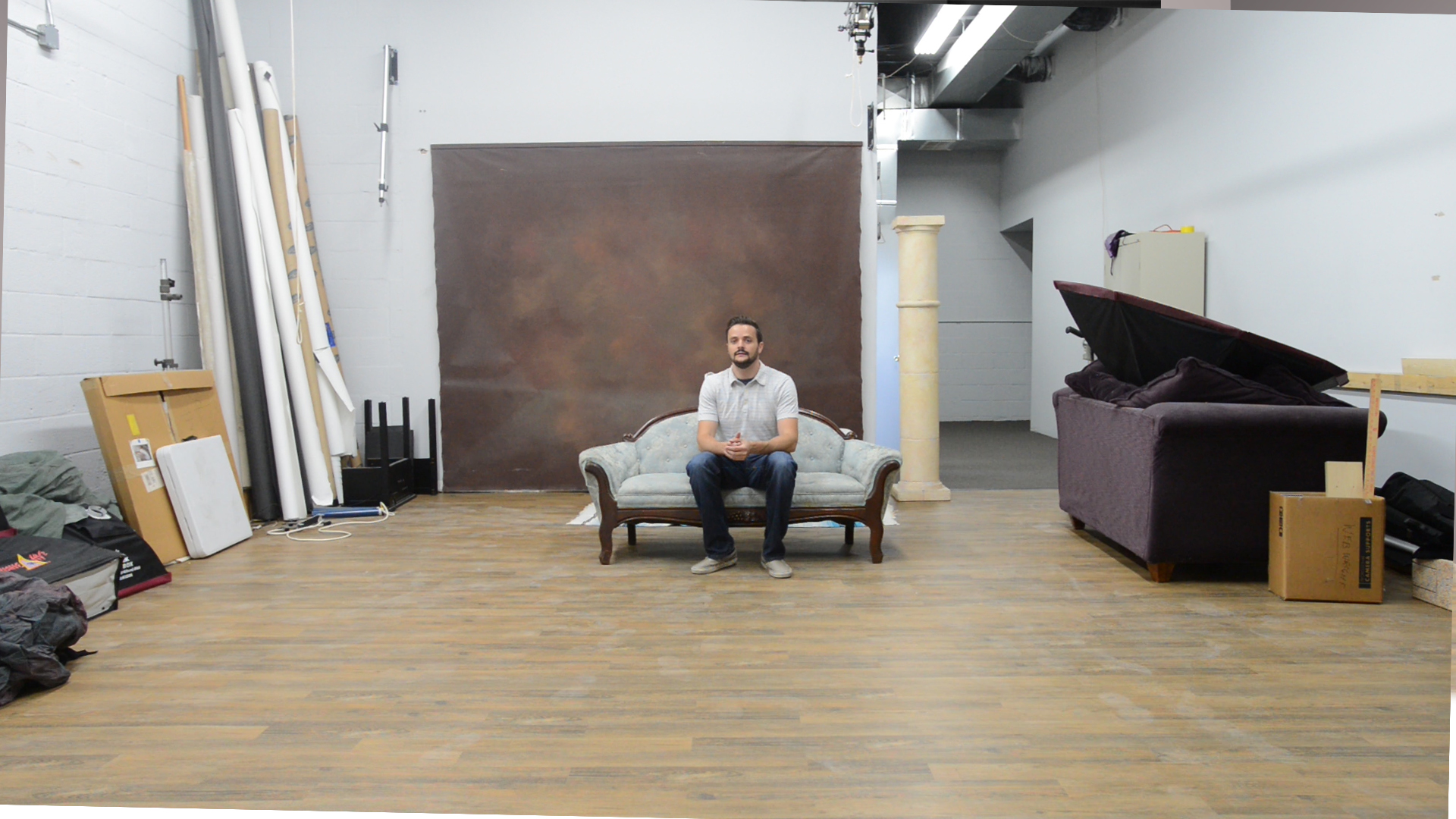 Another possibility. This location already had the wood floors, which was a plus. The height was great, but the width and depth didn’t quite give us enough room.

Ingenuity and the internet

The answer to that question surely existed somewhere in the combined resources of the internet and our intuitive problem solving skills. The foundation of our set would be comprised of two main components — the walls and the floor. The floor seemed pretty straightforward. We’d buy some laminate wood flooring and try to be gentle with wear and tear so we could sell it once production ended (we completed a successful Kickstarter campaign to raise and additional funds for the film — and we planned to make those investments go as far as possible). 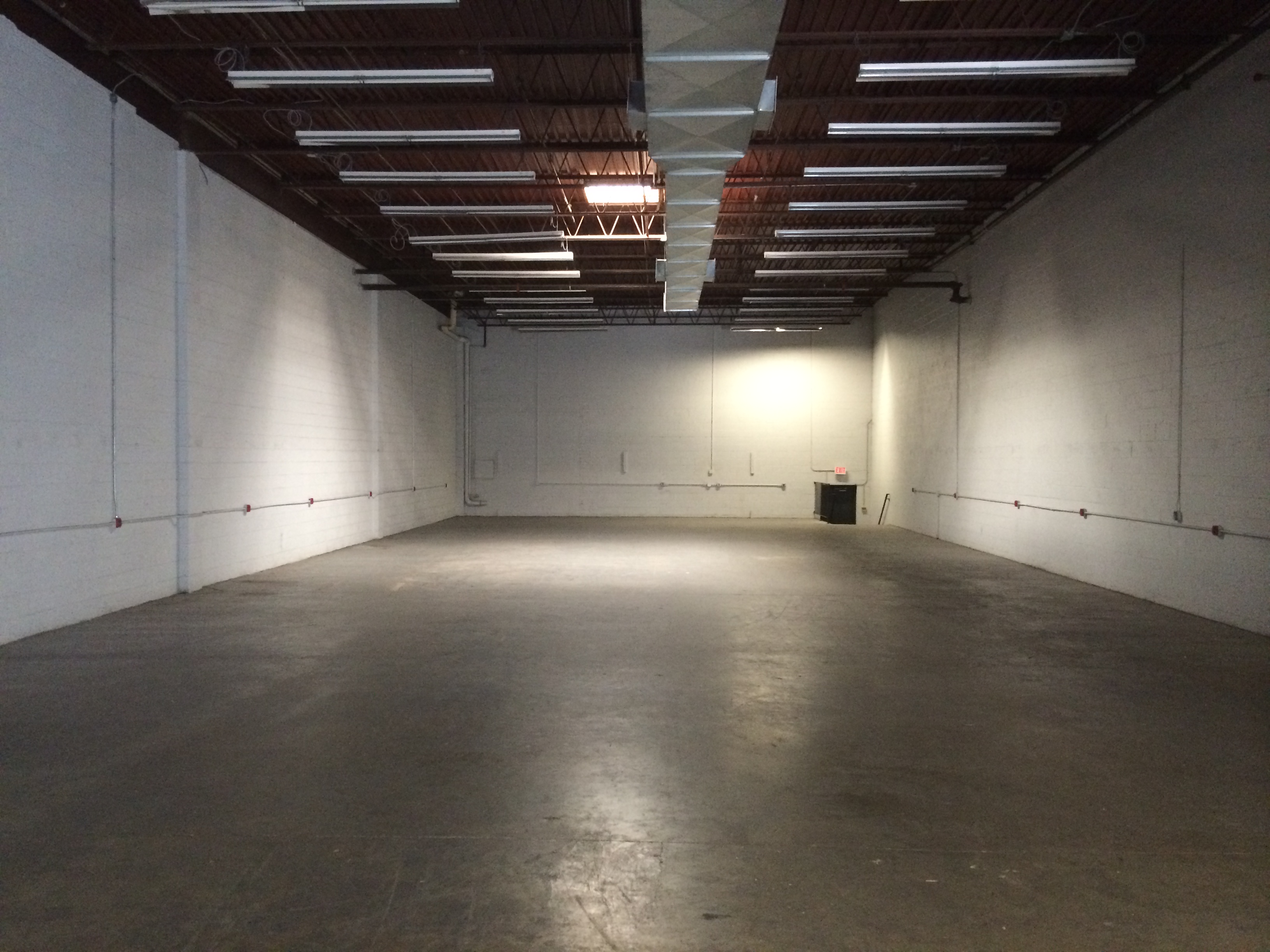 Meet our first studio lot! We found a warehouse that was perfect! Really close, empty, clean, with a bathroom and air conditioning… and it was a lot bigger than we needed!

With a quick plan in place for the floor, the next challenge was figuring out a design for the walls. I had some experience years ago (as a kid really) working for my uncle’s construction company framing rooms and hanging drywall. I knew we’d be doing something similar, but scaled back to meet our temporary needs and convey the mere illusion of permanence. A few internet searches revealed that what we needed were theater or set “flats”. You see these all the time when you attend a local play or high school production: sections of wall, usually 4′ x 8′ panels, held together with a simple wooden framework and weighed down with sandbags. 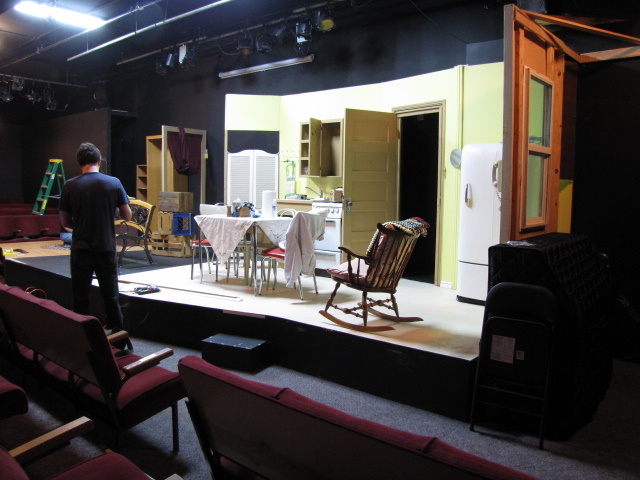 An example of typical theater flats. Photo by Stephanie Roberts.

In my internet questing, I found this video: a fairly detailed tutorial on flat construction. This began to form the basis for my own designs and cost estimates. To figure out the amount of materials needed, I worked out a size we’d need for our room based on the real places we’d scouted and then rounded that into a number of flats. The result? We would need to build a room 20 feet wide (utilizing 5 flats for the back wall) and 16 feet deep (4 flats for each side wall). 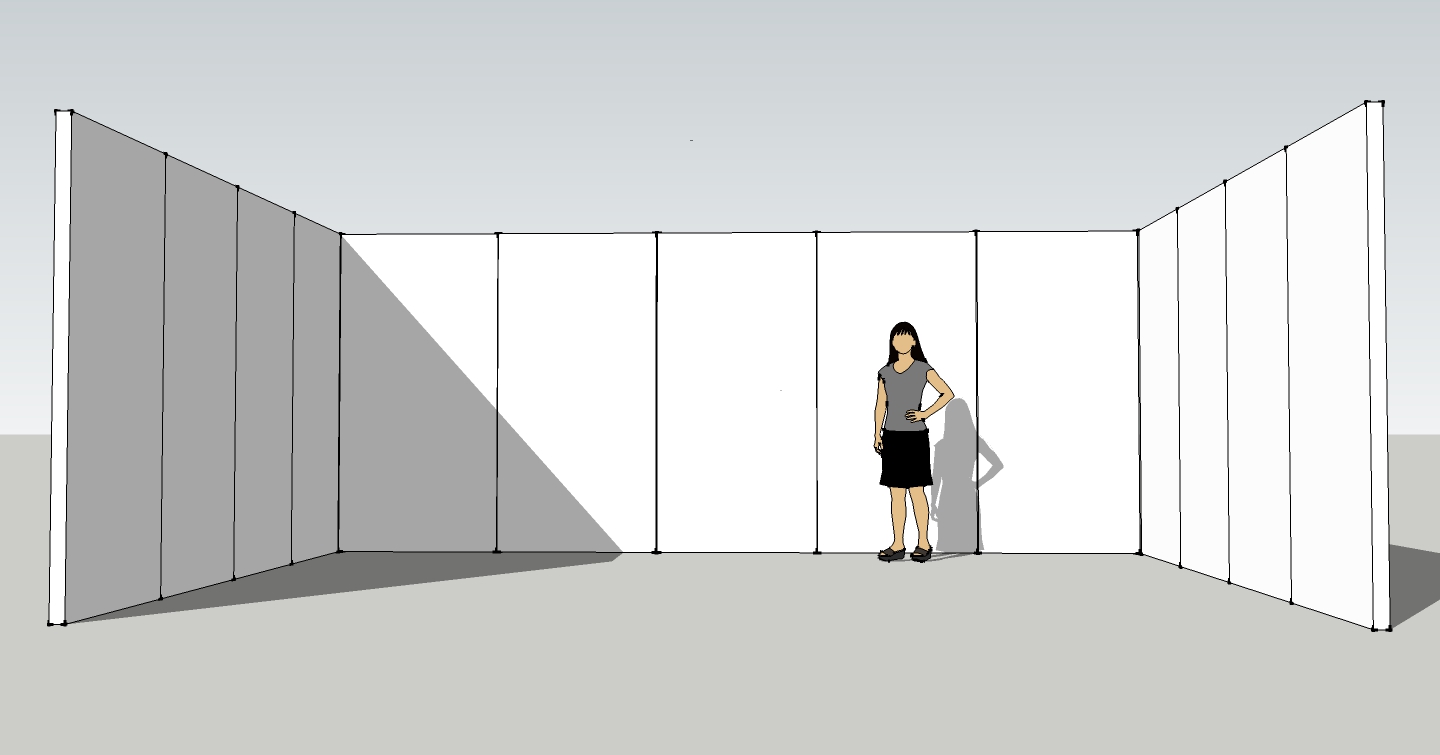 A google sketchup shows the initial plan for a set of theater flats that would form the walls of our set. Each flat is 8′ tall and 4′ wide, creating a room 20′ x 16′ x 8′.

Obviously, just having plain featureless walls wouldn’t fit the aesthetic we were aiming for. So, once the initial framing of the room was determined, we began adding details on the walls… a chair rail, base moulding and some wainscoting frames. These were simple additions that instantly gave the walls more prominence and character. All these details would accentuate the hard light we’d be using; creating highlights and shadows that would add depth and interest and a real physicality to our set design. 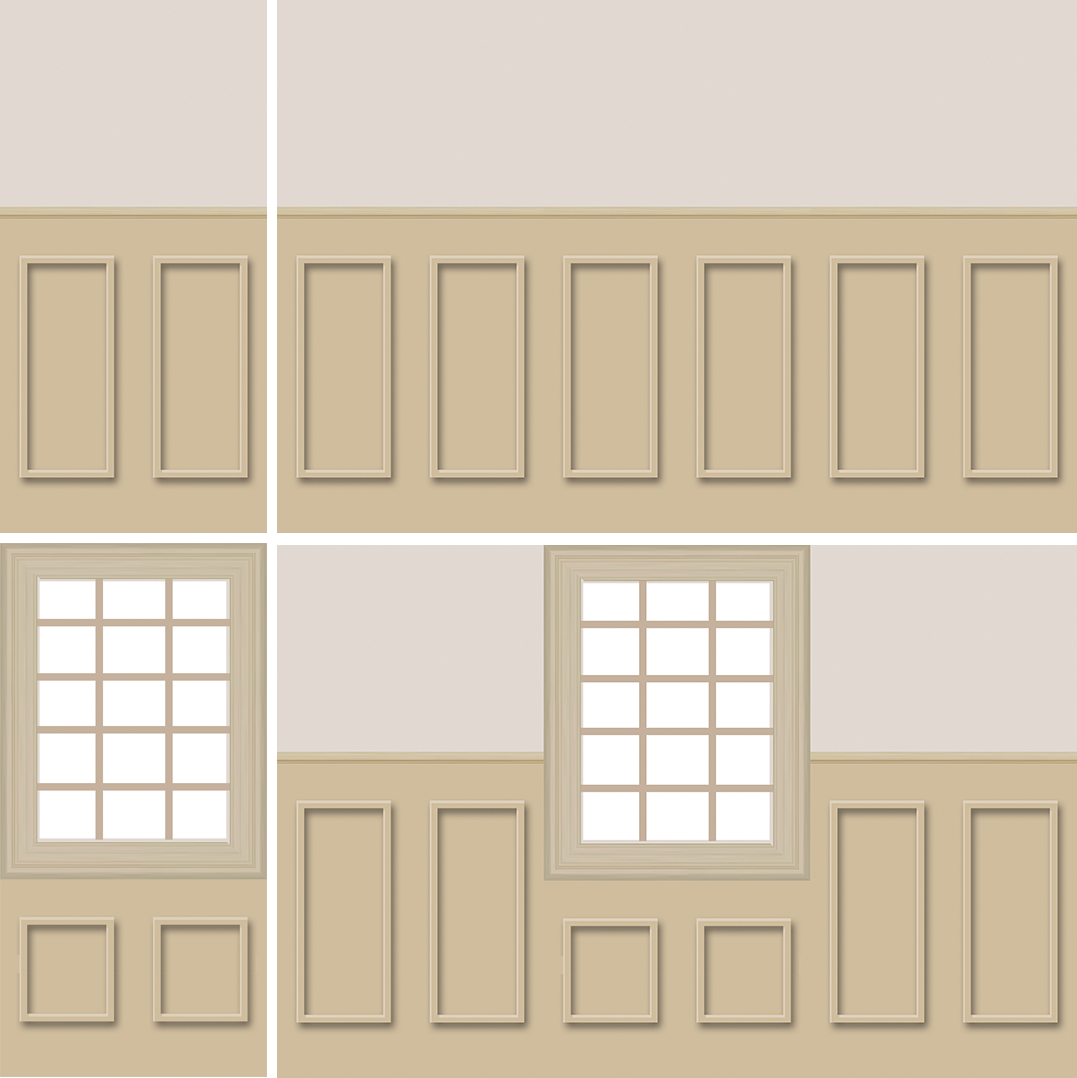 This early design mockup shows the details of a plain wall flat and a window flat, and how they will fit together in sequence.

These wall details provided a good starting point for creating a more engaging three dimensional space for our story, but we wanted more! We needed to incorporate a large window that serves a key purpose in the story into the set design. For symmetry, we decided there would be two windows — each placed in one of the corners of the back wall. To add more depth to the room, we bumped the three center panels on the back wall forward about 8 inches. On that bump out, we added a fireplace and mantle to create a visual centerpiece of the room and to help complete the illusion of a decadent mansion parlor. Finally, we would build the lower half of the set physically, but then extend the set digitally upwards in post production to really give it a grand scale. We were almost recreating the architecture of the Fairfield Estate, one of the first locations we scouted (photo at top), but to better suit our needs while altering the details to our liking. 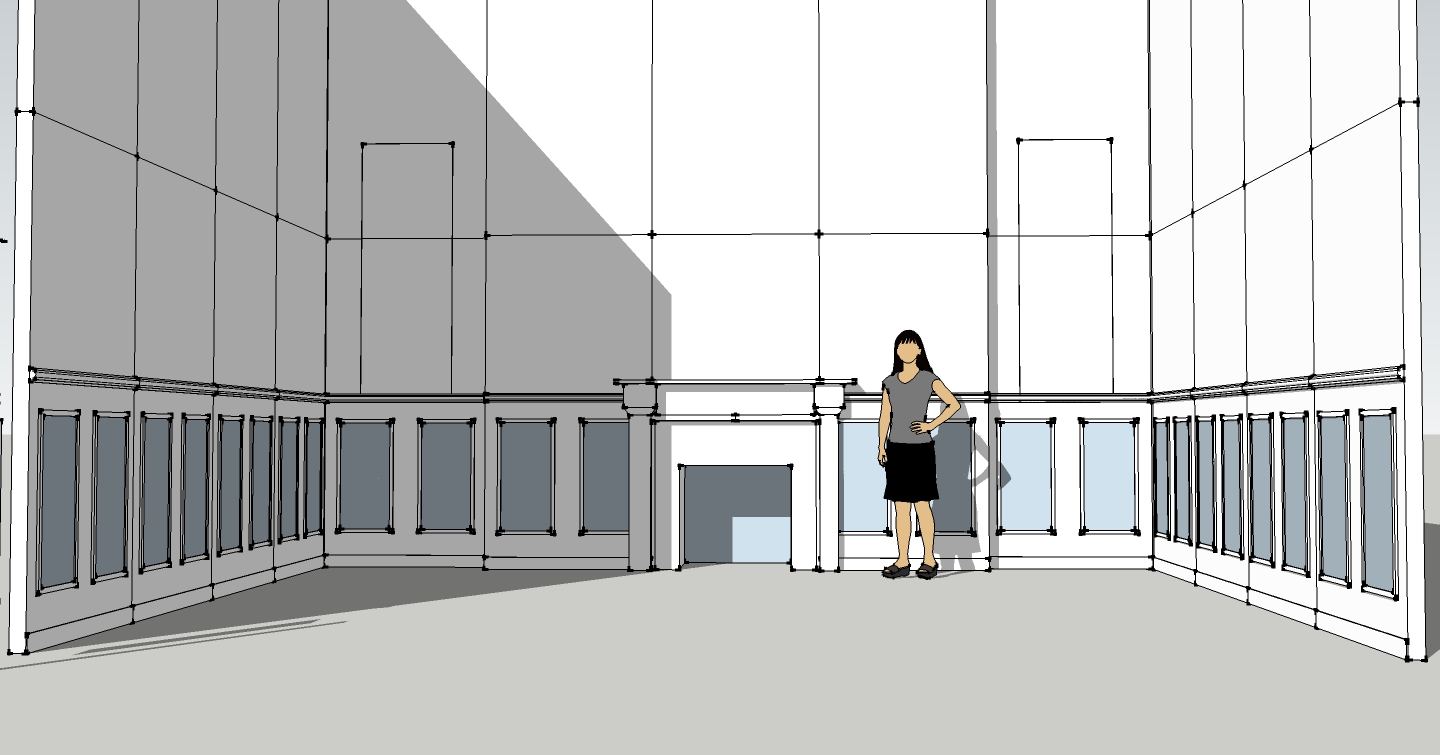 This later draft shows some of the details on the wall, and the higher walls that would be extended in post production.

The rest of our set design would rely on furnishing and decor. We had some required needs defined by the screenplay, such as a central couch or chair, a side table, a birdcage and a very odd and very large painting of a goat.  We also knew we’d need some other pieces of furniture in the back and sides of the room, along with some thematically relevant artwork and other items of interest atop various surfaces. So, we sketched out some rough ideas for the furnishing and decor and adjusted as we continued to research and select pieces found online and through several trips to antique stores. 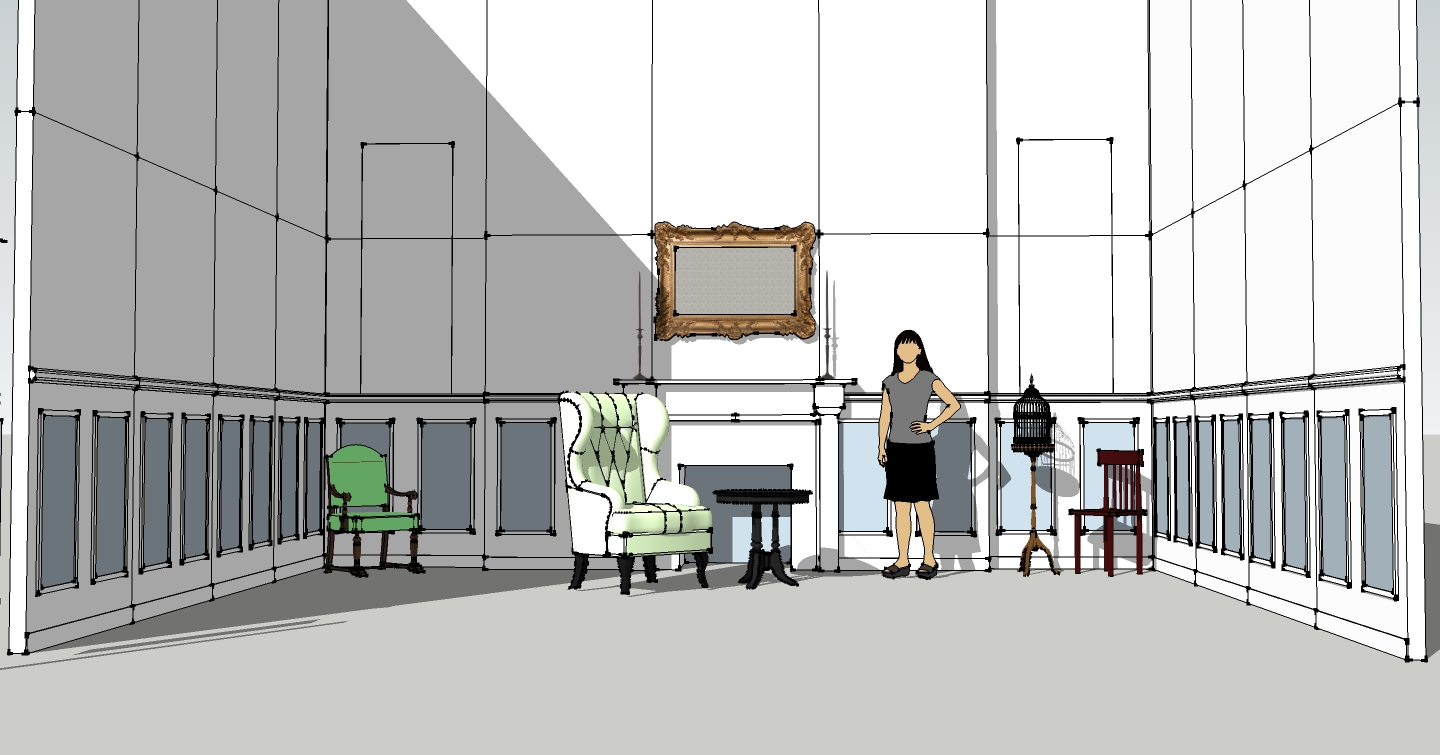 This pre-visualization rendering helped us figure out the scale and placement of items we acquired to decorate our set in relation to the room, all before it was constructed.

Eventually, we developed pretty solid and detailed plans for set construction, furnishing and decoration. That was a great feeling, but we still had to try to build it and see if all these plans worked!

Find out about the perils of our set construction in Part 2 of our set feature series, coming soon! If you’d like to know when Part 2 is published, please be sure to follow us on Facebook, Twitter and subscribe to our mailing list to stay up to date with this project and those in the future. If you have any specific questions about our set design, please use the comments below or send us a message on social media or through our contact page.